Since 2009 I have been the dramatic advisor for the theatrebox company and responsible for the dramaturgy of the annual Wilhelmsburger Wintermärchen plays by director Julius Jensen at the Honigfabrik. With an experienced team, we develop a new multicultural play for the Veddel neighbourhood in Hamburg every year around christmas. In the forefront of this event, our team including me works with children and the results are included in the text of the play as well as prepared for an exhibition accompanying the shows. The topics belong to the world of the elementary school kids in Wilhelmsburg and the plays are ambitiously produced by our team of professionals. Our play „Edels garden“ even was placed third in 2011 for the  Hamburg Childrens theatre award, (read a report in Godot).

„The Blue Chair“ (2009) was our first play, based on a childrens book by Claude Boujon.Mr. Schwärzlich und Miss Klops, two symbiotic creatures, are bored and find a blue chair. With their fanatsy and the chair, they start an adventurous journey around the world, torn between being homesick and longing for far away, followed by a weird camel… 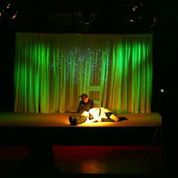 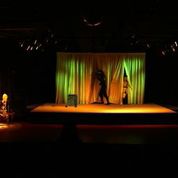 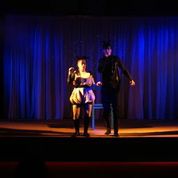 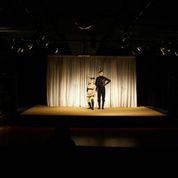 „Two monsters“ by Gertrud Pigor (2012) ist about two monsters living on seperate sides of a mountain and getting into a fight about the position of the sun. And even the sun as a glamourous referee can’t stop their final (pillow) fight (article in the Abendblatt). 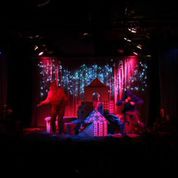 „Edels garden – Polly, Grummel and the nomadic flower“ (2011) was our third play. The young dog Polly and the old stone Grummel watch over Edels garden strictly – without even knowing why exactly everything has to stay the way it is. One fine day, the nomadic flower Mira just wanders into Edels garden and turn their world upside down (read a report in Godot). 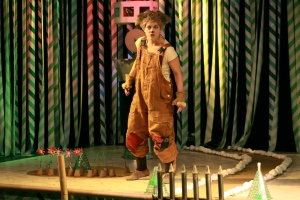 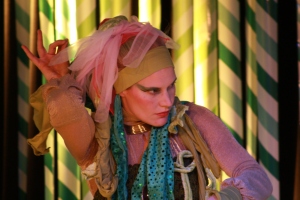 „Penny and Cash – a piece of money“ (2012)  is a play revolving around the financial crisis and the system of money. Penny and Cash don’t have much of that and live in front of a cash point. When this suddenly starts to throw out money wildly, their journey into the abyss of shopping frenzy starts (read a report in the Elbe Wochenblatt). 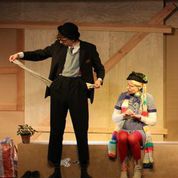 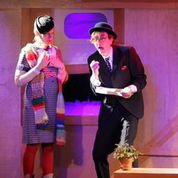 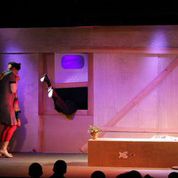 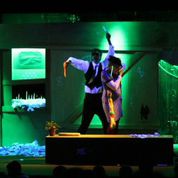 „Doctor Faust„(2013) is an adaptation of the classical play by Goethe for elementary school children. Driven by his thrist for knowledge, the old Dr. Faust agrees to a deal with the devil Mephisto, who drags him through the partydisco Auerbachs cellar and he is bewitched into a younger version of himself by a witch. When Faust finally meets Gretchen and threatens to fall in love truely, the devil has to pull out all the stops to prevent this and still win his own bet with god (read a report in Godot and a review in Godot) … 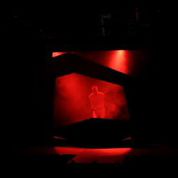 „Looking for Lala„(2014) is a play we again developed ourselves. It is about siblings: Piet learns to live with his younger sister Lala – until she vanishes on the playground and he needs the help of his blood-brother to find her (read a report in Elbe Wochenblatt.

In 2015, we developed our new play „Journey through Schlaraffia„, which features an orange called Clementine. On a waste mointain she meet daring yogurt Yogi and the sad leek Larry. Together they escape their fate of rotting away because of not being perfekt into the wonderland Schlaraffia – which turns out to be not that wonderful at all… (read a report in Elbe Wochenblatt and Godot)

In 2016 the Wilhelmsburger Wintermärchen „Lucie and the dream wanderers“ took viewers straight into the weirdly wonderful world of dreams: Something’s wrong with Lucie, her parents start to worry. The doctor diagnoses her with not being able to dream! So Lucie has to go to dream school and learn how to dream. But she’s not into dreamy-math, nightmare-theory and sleeping technique – dreaming just won’t work and Lucie wants to go home. But when she meets the secret club oh dream wanderers, her new friends take her on a trip into her wildest dreams searching for her real dreams… (video in Hamburg Journal)

Also I was responsible for the dramaturgy of the following projects:

I co-developed the play „Angel maxi rocks“ for the Zeppelin theatre in 2015 – a play for very small children about a curious angel who visits earth on Christmas and ends up celebrating with a rat in the garbage, both learning a lot about presents and friendship.

As a dramaturgy assistant, I worked on the following projects:

I have also helped since 2010 at the Heart racing festival in Deutsches Schauspielhaus Hamburg and assisted at the writing course newcomers.texts bzw. Theatre.texts of the young  Schauspielhaus for David Spencer and Kristo Sagor and I have been responsible for the theatre programme at the Wutzrock festival.